NEXT: Getting Started with Scoliosis.. 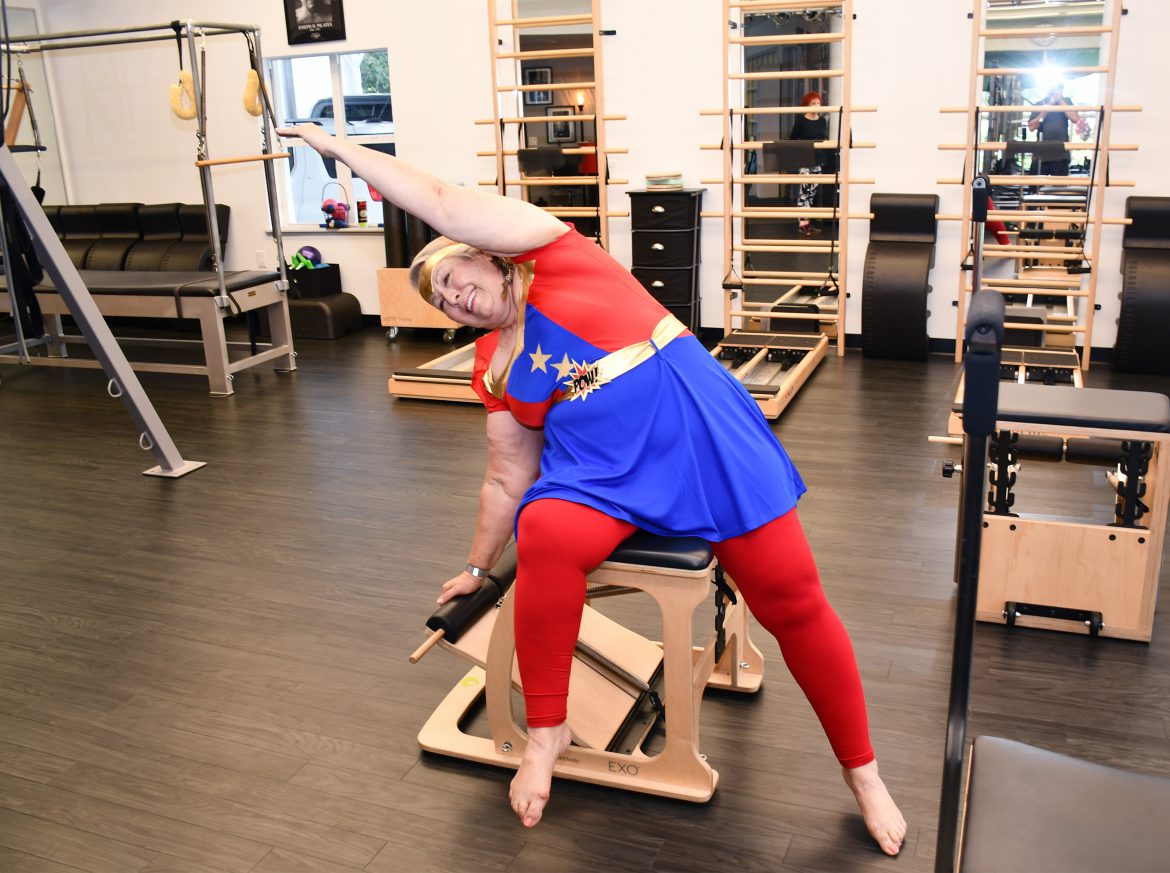 Patricia Massey Welter shows off some her most accomplished clients from her Florida studio, Suncoast Pilates. But don’t expect perfection: These athletes have “real” bodies with real limitations.

First up, how Jackie, a 67-year-old business owner with herniated discs, arthritis, knee issues and more, found inner and outer strength with Pilates.

We all know that the media usually portrays beautiful people in perfect form while exercising. Although there has been more diversity—older adults, people of all races, ethnicities and figures—in recent years, these “models” still look pretty darn perfect.

As an instructor and a teacher of teachers, people often ask me, where are the photos of people who don’t look perfect? Where are the “real” people? How do instructors learn if only perfect form is demonstrated? The goal of this blog series is to highlight the client who walks through the door—with back, neck, knee, shoulder and hip issues, poor posture, osteoporosis, scoliosis and spinal stenosis—and to show how Pilates can change lives. A client of mine, Jackie, once told me, “My father said no woman should ever weigh over 125 pounds.” Her father put her on Metrecal, a diet plan popular in the 1960s, at age nine.

Today, grownup Jackie is a tall, fuller-figured beautiful woman. At one point in her life, when her weight was at a low point, her collarbone jutted out and you could see her ribs, but she had an ample bottom and generous thighs. But what Jackie really wanted was to be strong, flexible and coordinated.

I originally met Jackie in 1996, when I worked for two physicians who had hired me to design a fitness program for their patients who were looking to lose weight. She faithfully came in two to three times a week for walks and workouts in the back of the physician’s office, and lost quite a bit of weight.

When I opened my studio, Suncoast Pilates, a year later, we continued to see each other until her bookkeeping business took priority. Jackie had built a large business with many corporate clients and found herself working over her computer all day long.

Three and a half years ago, Jackie and I reconnected. She told me that even though she has exercised her entire life, as she got older, the physical restrictions of herniated discs, arthritis, bad knees, extra weight and years of working hunched over a computer limited her options. Even walking was a challenge because she lost confidence in her sense of balance.

“Looking at photos and videos of Pilates classes, almost everyone is slim,” Jackie told me. “Even so, I never felt self-conscious in Pilates like I have in other classes, including yoga. I think that is because the atmosphere is accepting and encouraging. From the beginning, I knew it would be a journey, but I would be stronger and better with each session.”

Since that conversation, Jackie has been doing Pilates twice weekly at my studio. Now at age 67, Jackie has lost more than 30 pounds. “Since coming back to Suncoast Pilates, I have become stronger, more flexible, balanced and have better range of motion,” she reported. “My overall pain level has reduced dramatically, and if I have a rough day at the computer, a Pilates session relieves it.” Originally, we started with a focus on Footwork with limited knee flexion, and did work with the leg straps, incorporating a wedge to help support her neck and back. She has since mastered Elephant. Initially we did Chest Expansion sitting on the Long Box, as standing aggravated her knees.

We have since added Pulling Straps, Breaststroke and select Short Box abdominal exercises. We now do standing Chest Expansion, utilizing the Ped-o-Pull for alignment and posture.

On the Pilates Arc…

We developed a routine for Jackie on the Pilates Arc; Jackie purchased one for home and travel use. With the back support provided by the barrel, she can perform Scissors, Bicycles and leg exercises. As Jackie has such problematic knees, getting off the floor is difficult; with the support of the Arc, she is able to turn prone, place her hands on the Arc and lift her hips up to the air (as in Elephant) and roll up to standing. Thanks to the support of the arc for her wrists, she is able to do Plank (which has allowed her to progress to Long Stretch on the Reformer).

This is our go-to piece of equipment, since we can focus on all the stretching Jackie needs after sitting at a desk, as well as the more difficult exercises (Swan, Teaser with her legs in the Trapeze, side-lying leg work and arm work).

The focus is on Hamstring Stretch 1 (Roll-Down) and seated Mermaid (side stretch), seated Footwork, again limiting knee flexion, and calf strengthening. We have gradually added mat exercises here, too.

“As the years take their toll, we find ourselves saying, ‘I can’t’ too often,” says Jackie. “Pilates (and Patricia Welter especially!) challenges us to use our bodies, push our comfort zones, and most of all, keep learning so we can say, ‘I can!’”